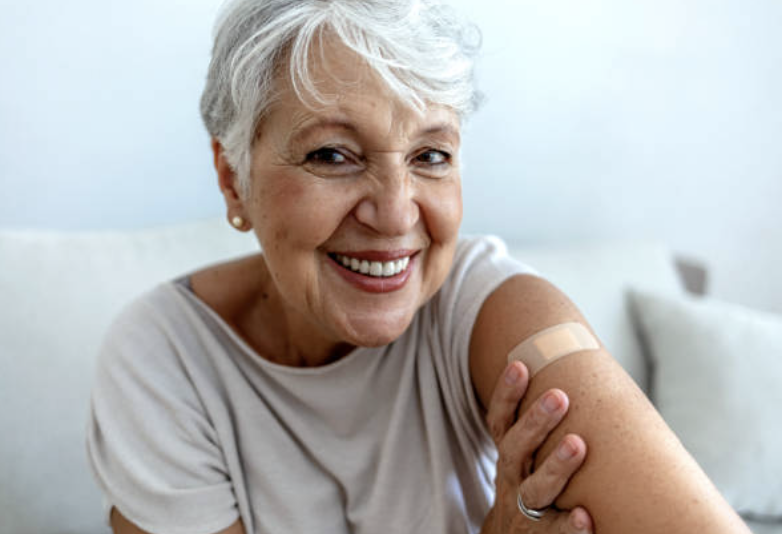 It turns out influenza and pneumonia shots protect seniors from more than just nasty viruses. Research has shown that older adults who receive routine immunizations have a reduced chance of developing Alzheimer’s disease (AD).

Cases of Alzheimer’s are rising, with 6 million Americans living with the disease. By 2050, that number is estimated to grow to 13 million. The protective benefits of the flu and pneumonia immunizations may play a role in developing preventative and therapeutic treatments for Alzheimer’s disease.

Pneumonia Immunizations and the Reduced Risk of AD

Research published in The Journal of the Alzheimer’s Association by investigators at Duke University Social Science Research Institute found that vaccination against pneumonia before age 75 may reduce the risk of individuals developing AD by 25 to 30%. Study participants with no genetic risk factor for AD had the most significant risk reduction at 40%.

“We do need more research to understand what that connection is,” said Carrillo, Alzheimer’s Association chief science officer Maria Carrillo.

“Is it direct, the vaccine to disease? Or is it protective, as a part of the risk reduction strategies that we have, like lower your BMI (body mass index), watch your sugar intake, keep an eye on your cholesterol and high blood pressure, exercise, get vaccinated,” she added. “It’s one of those sort of health tips that we need to make sure that our public knows about.”

According to the U.S. Centers for Disease Control and Prevention, pneumonia shots are recommended for seniors 65 and older. Typically, the pneumonia vaccine is two shots given one year apart. However, this immunization is not needed every year like the flu shot.

Influenza and the Reduced Risk of AD

Flu season in the U.S. typically starts in the fall and runs through early spring — peaking in February. Individuals over 65 are greatly encouraged to receive their annual flu shot since they are at a higher risk of developing influenza-related complications.

A 2022 study published in the Journal of Alzheimer’s of Alzheimer’s Disease has found a protective link between AD and receiving the annual jab. Investigators found that people who received at least one influenza vaccine were 40% less likely than their non-vaccinated peers to develop AD over the course of four years. The study was led by a UTHealth Houston research team.

“We found that flu vaccination in older adults reduces the risk of developing Alzheimer’s disease for several years. The strength of this protective effect increased with the number of years that a person received an annual flu vaccine – in other words, the rate of developing Alzheimer’s was lowest among those who consistently received the flu vaccine every year,” said Dr. Bukhbinder, who is still part of the UTHealth Houston research team while in his first year of residency with the Division of Child Neurology at Massachusetts General Hospital. “Future research should assess whether flu vaccination is also associated with the rate of symptom progression in patients who already have Alzheimer’s dementia.”

Researchers still aren’t sure how the vaccines produce the protective effect. They say more studies are needed to understand the complexity of the human immune system.

Dr. Bukhbinder says it will be worth investigating whether the COVID-19 vaccine produces a similar protective barrier and reduces the risk of developing AD.

A Motivation for Immunization

It is estimated that 70 to 80% of flu-related deaths occur in people 65 and older. And in the U.S., pneumonia is the most common cause of hospitalization other than people giving birth.

For seniors, less severe infections should be a motivating factor for routine immunization. If that wasn’t enough, we now have research showing greater preservation of cognition. Without a cure for AD, we should encourage the residents we serve to embrace every opportunity they have to reduce the chance of developing this devastating disease.